rust bloom again - past tense - went bye bye still here trace elements, liquid mercury - meaningful dreams condense when a bit of the ceiling fell down to the exact spot where i was standing 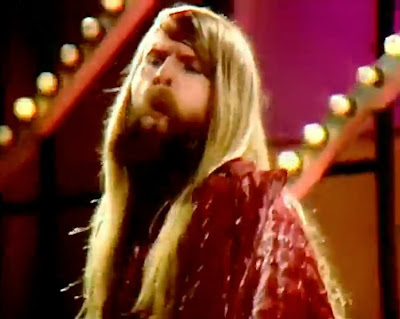 ah, the richness of the waking-up metaphor, however inapropos - how profitable the vein of future lyrics a branch of assonance promises in an uncarved block of schlock and trite workmanlike information conveyed by belts - what's the cycles per second up to, thirty-two gigahertz? tomorrow's mills and processing facilities are here today, horray!

'n so, what is writing, again? i must have forgot, lost the sense of it - best case scenario, i'm a technician sans magic lately ('xcept the magic fader), but i do believe in magic, man - but writing, that wretched thing, feels weird, either solipsistic, or presumptuous, that anyone should read - either/or - perhaps i should switch to sentence case and re-embrace punctuation, just to crick and crack some bones i never knew were stiff to the point of brittle - ol' man johnny ain't what'e used to be - dick-ay, eh? at the rate of a pro-football player minus ever having any physical prowess - except the sneaky smallness of his frame, being able to hide and fit in tiny spaces to evade the giants, and the fast metabolism, nothing sticks to the ribs - he never was very limber though, never could do those splits and lunges and yoga moves, and now he's on the fasttrack from that subpar norm to malady accelerado, where he's supposed to "learn" what he's felt all his damn life, the fragility of physique, the reality of mortality, the fleetingness of life, etcetera - you caint school me on nothin' jack, i knew it already

okay jackey, maybe you can school me on a few things, i stretched that point a bit just to make a point that needed to be made and taken to counterbalance a giant bias of trite-ness that gets mistaken for sage wisdom, because convention gets so big and heavy it gets to attaining an oppressive gravity that people mistake for a universal constant rather than an accident of mass
- November 14, 2013 No comments:

lyrics:
i am oxygen
you are hydrogen
together we make water
we are the clouds who rain down
we gather in valleys
carving our way
through deep canyons
where we eventually spill
into the ocean
and evaporate, once again
to contribute to a new cloud
- November 08, 2013 No comments:

lyrics:
you are a trip artist
cause when i look at you
i'm never sure of anything anymore
purity's obscurity assures

you are so pure, you have no boundaries
i hate that i have to temper you
his name is trumpet boris, you said
how can i bring myself to correct you?

you are so pure, i love to watch you play
rockin' the boat that we're all on
old school, old soul, i am new in your eyes
but i am your father in this life

you are so pure, you have no boundaries
i hate that i have to temper you
his name is trumpet boris, you said
how can i bring myself to correct you?

If happiness could be rationed
and redistributed
would there be enough to go around?

once i fingered synesthetic braille
i didn't have to try very hard
colors were pitchy, contours loved me
spiritual hangover when penance didn't hurt

now things are different, there's lots more channels
and most of them don't work anymore
but i keep my finger on the magic fader
simplicity through sensory starvation

If happiness could be rationed
and redistributed
would there be enough to go around?
- November 06, 2013 No comments:

it took a long time, it took a lot out of us
to play at being snobs
it's the hard won summit of a molehill, from which we see
the flatness of the world, and the mobs who took our jobs
the most serious and somber procedure of arranging
words and tones into pretty little patterns
feels important if you just don't think about it too hard
the solipsist will benefit

music is worthless, information's free
the masses are superior to you and me
they work harder and they work dirt cheap
they keep busy contriving creativity

rebuilding, re-breeding like we always do
but people aren’t special these days
we are masses and masses and most of us are surplus
someone's got us pegged
we're statistics, not tragedies, notes, not melodies
in demographic symphonies, playing dusk to dawn
they herd us through the mall corrals, put us out to pasture
buried under short-cut cemetery lawn

nobody gets benefits
but if you ever get in trouble
think of something sad to force the tears
and game the system with your pretty intern face
sympathy's your consolation prize
it's barely sympathy, much less empathy
really just self pity, self justification
the only kind of justice there can be

music is worthless, information's free
the masses are superior to you and me
they all work harder and they work dirt cheap
they keep busy contriving creativity

i haven't felt right since my last fit of ecstasy
i saw the deadlight, it was no birthright, it's gonna make me wish i never had sight

kill empathy, it's the only way to survive the 21st century
we've done studies, you can't bring your mercy to the 21st century
it's okay, you'll be fine, we'll cut tragedy
make it passe like christian charity
it's a highly nuanced upgrade - some nerves need be severed
learn to love the blackouts and the operation will go smoothly
we'll cut funding to your soul, you can live without a soul, did you know?
you're a brain in a body, arbitrary, we can save your ego
forget your soul just save the ego - the solipsist will benefit
cause you can't contain the biosphere's pain
cut off your nose to spite your face, scorch the earth and mine space
the only answer is synthetic distillation
design drugs, customize genes
cook up schemes, solidify memes
kill empathy, it's the only way that we'll survive this century

everybody gets atrophy
so much to do, but so many to do it
it's been done a trillion times before
the difference makes no difference anymore
so let the crowd source our destiny
let the trends become a tsunami

talking monkeys, earth's greatest magic act turned into a housing tract
crammed into little vocational cavities for lack of opportunities
be sure to buy some anesthetic for your poor sore pegs
of jagged genetic defection
we're food for the next five hundred generations of germs
they're one step ahead, two steps, four steps, eight steps
revenge of synthetic perfection

put on your leather and join a side
pick a seat on the sadomasochistic thrill-ride
no empathy allowed on the thrill-ride
no sympathy given on the thrill-ride
that's your vision dreamer, let the sunshine out
let the inner light burn, let your bleeding heart clot
let the capitalists take care of it
let them venture let them gain
and fuck the ones who lost the game
deal with your own pain or be chained
to the gross global product of suffering and misery
against the grain of society
you'll be insane with empathy
seek self in the hive mind
there's no shame in the hive mind
and kill empathy
it's the only way you'll win a trophy

industrial munitions, lots of competition
plenty of ambition for precision machinery
cheap food, cheap gas, cheap labour, cheap life
the product of the 21th century
summertime is all the time
and the living in queasy in economy class
trying and dying while the water dries up
just giving it the old college drop-out try
or maybe cancel the struggle with anesthetic death
and reach for the pistol or the crystal meth
cause those saps on the coast had no warning, but you do
and who needs the chills of the heat death?

they say one day the culling will be done
and we'll be back in harmony
or spaced out in space colonies, no thanks to me
i'm too busy consuming facts of life for breakfast
excreting rich cream filling
recycling waste for efficient malnutrition
unwilling to be the first victim
let the brown drown, the ones who couldn’t find higher ground
the hut people on the flipside of the planet, damnit
let them bear the brunt of the purge
like they always do, they're used to it
thick-skinned holy mass of messiahs
god bless 'em, no! don't look at me
i'm weak, i admit it happily
i don't make a good martyr
my genetic specs support vast sensation
at the cost of delicate nerves
they're destined for the microchip mothership
we'll escape this planet with, some millennium
some millennium, some millennium
some motherfuckin' millennium