Haven't remembered enough. Haven't felt grief enough. Need to plumb further. Ah. Luc was going to be a plumber. Or a pipe-fitter. Or a geo-thermal technician. He even studied goddamn algebra toward that end. He said, to a friend, on having moved to Victoria: "One day you'll see my name in lights." 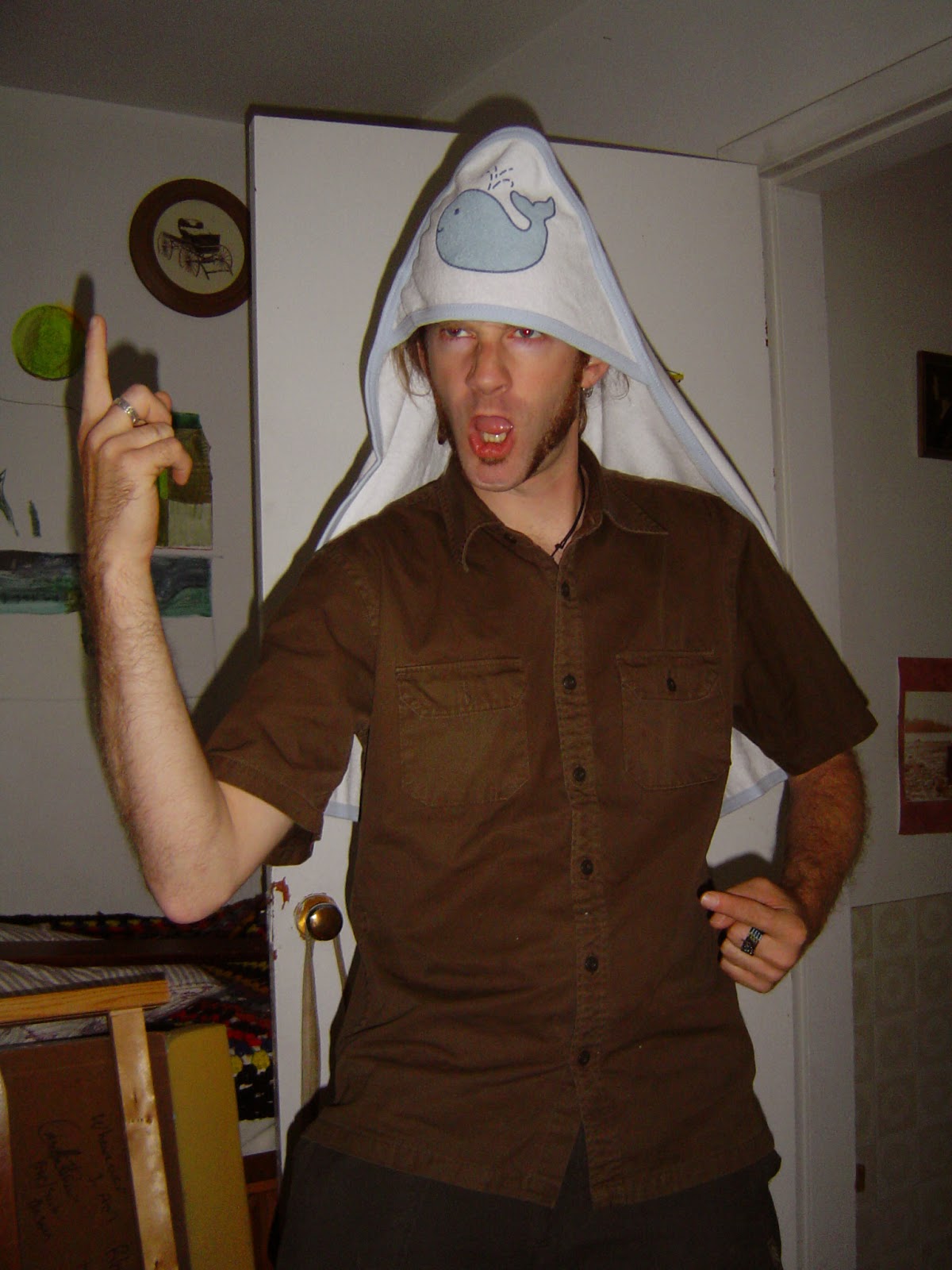 Audio records. A lazy day with Luc and Fidel. Nothing much happens. So retrospectively sweet.
http://www.jdeon.com/bin/creek%20-%20daytime,%20fidel.mp3

"Doe, a dear..." fading into room ambiance, AC hiss and spring sounds. The spaces and silence, and mellow Luc in papa mode, gently tempering the Fidel. So much happens in a lazy afternoon, with the novelty of Luc and his little son over at my place on Creek Street, such a funny confluence, Uncle Jonathan sleeping in the bedroom - putting Ratatouille, the movie Fidel wants to watch, on what must seem forever hold in kid-time. We did watch it later though, I remember. And Luc cried, moved by how beautiful a movie it was, respectful to food, and animals, and children, and all these other things he came up with, and I just howled with delight at the scene where the adolescent dishwasher masquerading as genius chef gets his first ever wine-buzz.

Around then, Luc would sleep under my bed sometimes, the high one, making a makeshift lower bunk on the floor out of my extra blankets and quilts - because the alternative was living out of his car. He was tough, he could endure a lot, but he didn't have to, I saw to that as much as I could, because he trusted me in a pure and perfect way. Maybe that's how the bond cemented, but there's so much more, don't know if I'll ever know where to begin. He gave me the gift of feeling useful, and able to comfort someone in need. It was a pleasure. So unique, when I'm in that role. I would play Aphex Twin ambient tracks at night to sooth us to sleep, or sometimes we would listen to the chill stream he introduced me to, soma. While we talked deep and shallow and every place in between. But the silliness was the best, because it was the most like music, when words played hard and dissolved into melodies and box beats.

Yes, it was a bromance. We had some cuddles, the only guy I could ever do that with, one of my fondest memories, on the porch of the edgewood house when it was Rhi's, after a blissful day with debauched serrations, booze and barbecue, cider and potluck, kids and family that's not family, when you can feel a bit looser but still close, and that was the afternoon we wrote "Trumpet Borus" together, about his boy. And then stumbled down from Gyro that night, and ended up sleeping on the porch together. 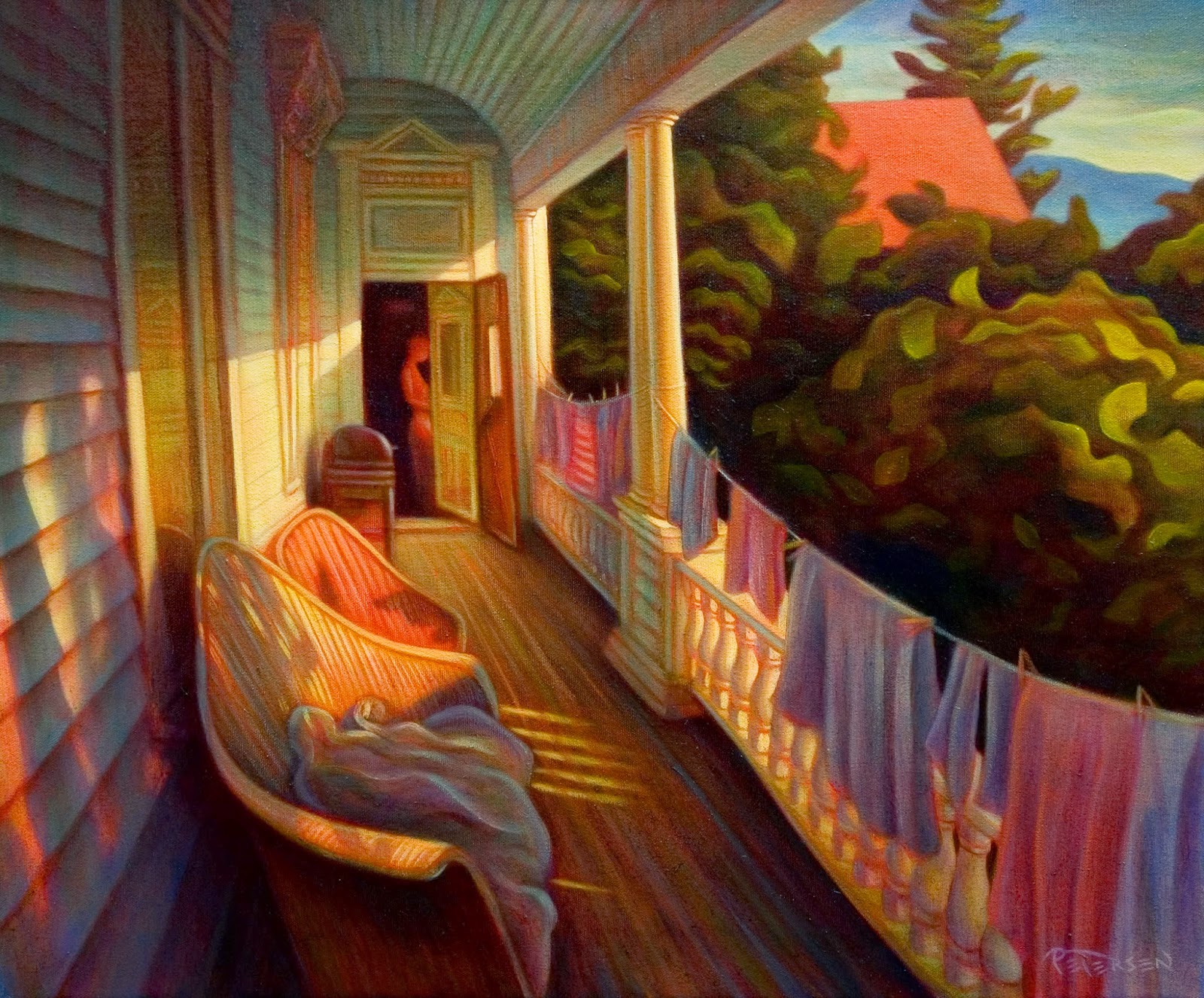 Step-mom Lata was going to put him in her will. But he died first. So many Forgets and Thibaults were dying around then, Luc said his people were dropping like flies. That's how I met Luc, not the very first time, but the origin of our true meeting, in that we shared the intensity that would become the norm, when he came over to my place, after his uncle "dragged himself into his cabin and blew his head off." Because I asked Luc how he did it, his favourite uncle who used to smoke hash with young Luc while they worked on muscle cars. I don't know how much of this information is necessary to whatever this is, but I'm going to spend a little time swaying to and fro on whatever twig I end up on. And we dealt with it somehow. Drink and song - back in those days, the drink wasn't necessarily totally evil. I nudged him into blowing off work that morning, I had to coach him through the phonecall, not to cave to his boss and "suck it up".

Later on, an uncle on his mother's side. It was a crazy day for Luc, lots of resonance I never recognized, still don't. Luc was on a trip. I don't know how much was real, but I'd never heard him rant like that before. This strange fractured picture of organized crime. Deep pain mixed up in paranoid metaphors that could have been true, I don't know. I was distracted by the black paint Luc squirted out of a tube into my eye after draining a bottle of whisky on the picnic table at Taghum beach, around 4pm. I don't know what that was about, but it's gone down as legend, how Rose had to drive over to pick us up.

Then Luc's dad with the brain aneurysm. But at least he got to meet his grandson, the one time, when we went to the family reunion in Grand Prairie and took pictures together in classic cars. 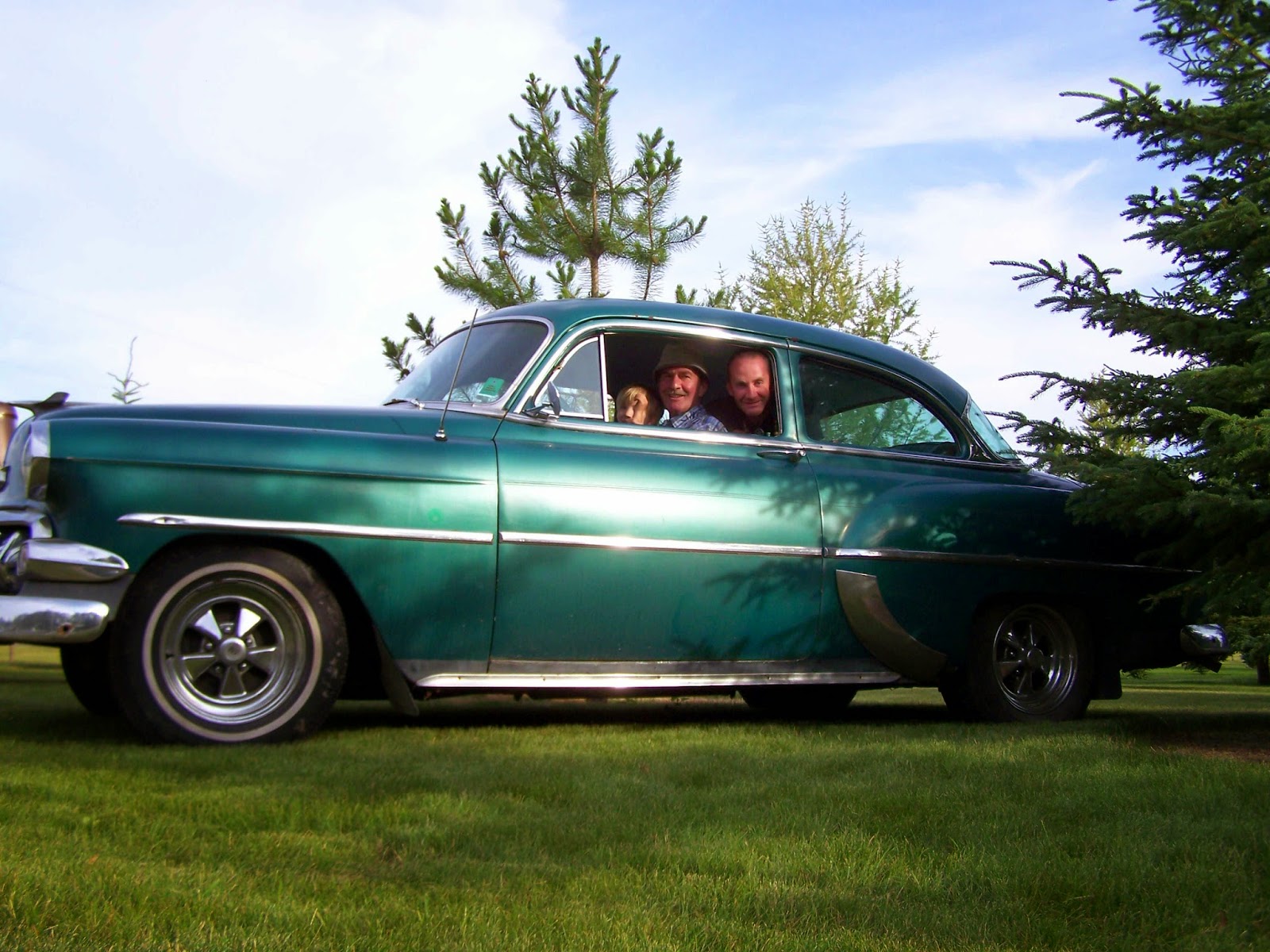 Still, Luc could be light and joyful like no one else I've known, and at least graze against the state that I dunno if I've ever reached, and reflect it back at me, so I could enjoy it through a bit of osmosis. He had a big window inside him, he could let a lot of light through. But I loved the frame even moreso. I loved how he framed everything. The goofy guy, the gentle man, baring wounds quietly, was it a rail-trip to death for him? I don't think so, accidents happen, they're cruel if there's any morality to it, and infuriatingly, there isn't, that's what I'm left with.

It's still too big for me to take on, the issue of a friend like that, like no one else, having died. It's sinking in over what are now multiple years, how there's never gonna be another person that will make me feel like he did, just being in his company. I'm still far from rising to the occasion and typing a fitting tribute, much less making a song out of it. That would take a kind of heroism I don't have. I don't know what that says, just that it's too huge for me, it's blinding. Somehow, unconsciously, I ignore the enormity of it, and go about like it's on some other plane, to an irrelevant degree. Can't make it relevant, can only feel it as cryptic mystic transcendental loss... and write a bromantic pamphlet in response.

There's so many sides to a person, I know so many people had their own angles on Luc. Of course I treasure my own vantage on the man, even knowing how different it was from others', how I knew him in what he ambivalently called "the bad ol' days", often down and out, both of us taking solace in a perfect blend of music, intoxicants, and sketchy edges.

Nowhere close to knowing what I can say about his death yet, if I'll ever be. But Rose is good about stuff like that. Grateful me and Luc had some amazing mutual friends with hyperkinetic expressive abilities that figure in to my remembrances these days. There are obvious implications for all of us. There's morbid curiosity I'm not expecting to be satisfied. Like in that letter he wrote to me near the end, in pretty good penmanship, but that ambiguous mark, was that a lower case h, for heroin? I'm not sure if he ever went there, and what does it matter, but some of it does matter to a dark part of me that turns to blinding deadlight like a sick plant pining for an alien homeworld.

If it was a little more butyraceous, maybe there'd be some use in it... maybe it'd taste better anyway. Certain words have lost all magic for me. Even worse, certain words that had none to begin with, now charmed with an inverse sort of magic. Bacon zombies.

There's a whole tangent on waffles in the crack between the rug and exposed insulation. I care too much to compose a daft draft with a limp wrist and lame-duck dick. There's words I can write if I can manage it, a new style prior to inspiration.

Misery. Miserable times for no reason. Maybe things just got all zombified, but it doesn't feel like that, only looks like it, doesn't seem to deserve the zing of a word that begins with a Z.

I could spin straw into gold, by writing as if... acting as if, going against the flow and spinning lies from whole cloth that turn into the truth for existing in a Cartesian way, the way he would argue for the truth of God, because God must exist, because a perfect being would have to exist rather than not exist, existing being part and parcel of said perfection, the whole kit and kaboodle, like if there are unicorns, you're damn sure they have the one horn, otherwise they wouldn't be unicorns, but if, and hey, wait a second, I'm reaching back that far, for, what? Almost not a tautology? I missed something terribly important.

Missed the boat, lost a chromosome, pretended I didn't need to catch that train. Novelty is habitual, another stripe on the lolly, everything's so sweet and bone-corroding, mimicking carpal-tunnel and fibromyalgia - two-hundred flavours of dishsoap on one aisle, clever extracts, facsimiles from flowers and fruits I didn't know existed with florid latin taxonomy.

How's this for an aside, I'm so atrophied, even though I thought I expressed so hard, tonight, well, I did. But this is different, it's a lost art, tantamount to tautological corpse-fucking nostalgia abuse. I could clean it up, but whath the point? When the world'tho full of crap.

The best comedy sped to me through feeding tubes, a depraved density. I got all laughed out. Never been so free of chemicals but still filled with other kinds of synthetic. So what do I expect?

Misery. For a moldy crumb of reason. Not horror. Been here and there before though. Texan and Mexican decorated tiles polished with stainglass subterranean xenonic light. Cause that could just about mean something. Well that's not the point, it's that I created that image in my head, but that's not the point either, it's that it made that sound, describing the image, pretty words standing around on the fringes of a social situation, a wingding with drunk F Scott and caricature Hemingway and wisecracking Joyce and an illuminated salad bar glass cover of commentators.

Might as well say some things straight out, but, nah. Where's the fun in that? There's some fun to be had trying to keep it all under cover of circus tents. That's not it either. It's the late late after ramble coming ghostly after what was assumed to be the last ramble, after such an out of the blue pall of silence and no scaffolding, no technique, and why would anything ever be read? When you got your Plato and Aristotle and Vice columnists and the crowd source for list-based click-bait articles. And colleagues who are mostly theoretical, albeit being a click away.

So, synthesizing a connective tissue with weldbond, here I am on Latimer street in a new place, and it's never been a shabbier novelty. I blinked, I blunk, opened my eyes and had a personal best beard, just about. That's how you get one of those, you've gotta care so hard about not caring, until itchy stubble smoothly transforms into an oblivious chin-mane. Caring all the while, not allowed to have a breakdown. This is the habit of staying sober, and being lucky to have work, and not caring to spend money on anything, nothing to buy, nothing will buy me out of this pointless purgatory, there's no purging, only becoming one with ammonium chloride. That sounds about right.