now a proud member of the rejected from eharmony club 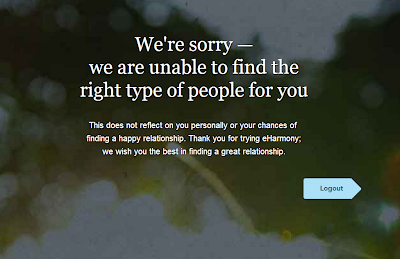 Yeah, well, fuck them anyway, and their personality test that is designed, I now understand, to pen similar-thinking people into niches like we're the periodic table of the elements. Eharmony: Be diatomic, not molecular! Because opposites detract and variety is bad for you! Filter out those who respond to a questionnaire with conflicting answers that reflect ambiguity and whatever else they were stupid enough to be honest about, being depressed sometimes, making under 20k a year? Definitely don't check that box when you're trying to sign up. Where's Ediscord? I'll have to start that bitch.
- December 29, 2013 No comments:

sour central nervous system - critiquing games and the possibility of games via the medium of let's play videos on youtube, that i could theoretically play, but am not, playing requires too much effort and processing power, so i'll just make educated guesses about how limited a player's options are - and dream about theoretical games of my own design, that might approach the level of art

art? really? or do i see that it's all people trying to seem cool, or affect profundity? and it's all such boolsheet - mine and their's as well - you can compare technical proficiency, but that's all there is really

really? or am i spending too much time, inside my own head, and living room, with my own thoughts as company, and not even writing about it much? trying to nudge myself into writing words a little more, to just at least begin to bloodlet, thoughts clogged and clotted - found warfarin, not bad cig stub for a ground score, chop giblets of prose from the butcher shop floor

trying to sound cool, seemingly cool? with a sore back, out of the game, proper thing b'y - this ain't no kind of life - and this half-life has gone on too long - couch potato immortality, leather skinned porter pre and post sinbad, i dunno - if i was stoned on something or other, it would all feel alright, but i've been "clean" for close to six months - clean and sterile, utterly sterile - so maybe too far to one end of the seesaw, it can't be all sobriety, cause that's just too somber a way to live, it suits me like hearts and diamonds - i need hard narcotics for medicinal purposes, psychological crutches, cause i'm still a social cripple, and trying to walk without them hasn't worked out so well, although maybe it kept me alive, out of prison and the waterford and the grave, so maybe there's that at least

working too much - for what? i don't know - compressed hours, hours of trying to finish quick as i can, so i can get back home for the night, and then a nother bout of long walking toward a wanking untaken

i miss pabst, saw a pabst can in a blue bag - got harassed again, last week it was cabs, this week cops, cause i always look suspicious, just let me walk home so i can sleep you fucking dicks, oh what a hard hard job it is, i'm sure, looking for black cats in dark rooms that aren't there, phoned in freakouts by petite bourgeois idiots in suburbs

too tired to remember about writing
- December 10, 2013 No comments:

Weight of age. Pre- lurch and awkwardness. I can appreciate. And yet it annoys me.

Camusian 'Why Not'? References: i am the walrus - the beatles, terence mckenna critiquing existentialism, go rest high on that mou...